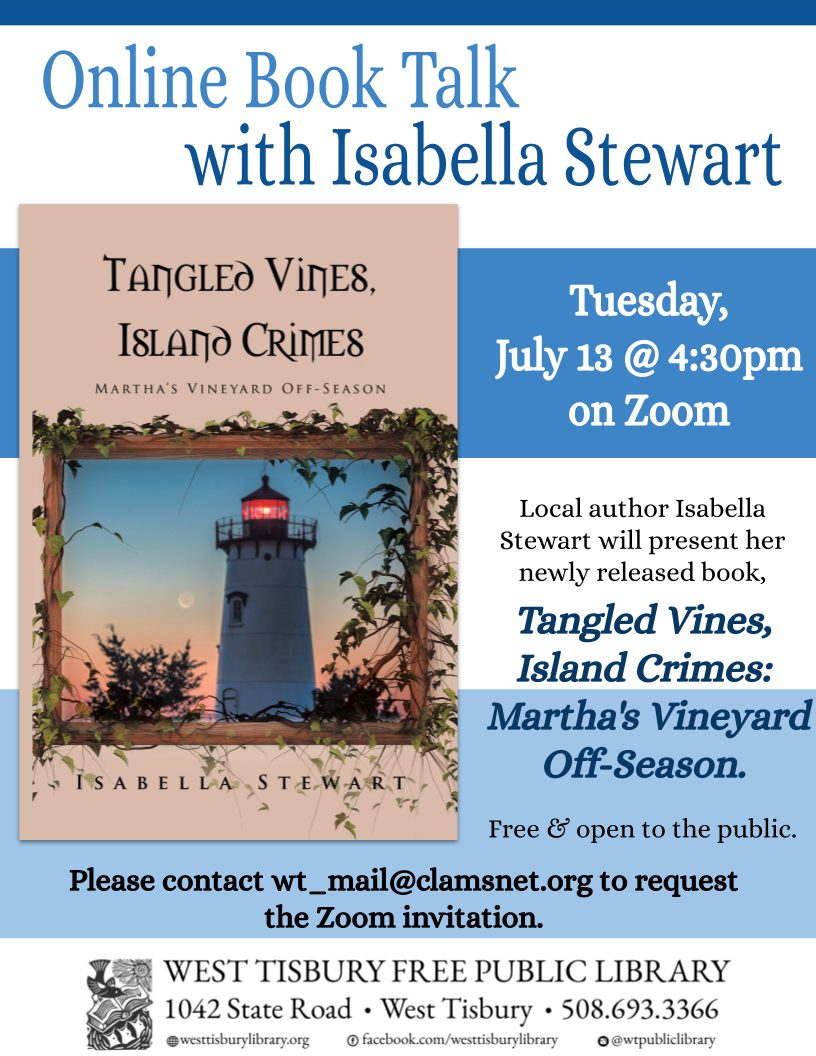 On Tuesday, July 13 at 4:30pm, the West Tisbury Library will host an online book talk with local author Isabella Stewart featuring her newly released book, Tangled Vines, Island Crimes: Martha’s Vineyard Off-Season. This event will be held on Zoom. Email wt_mail@clamsnet.org to request the Zoom invitation. This event is free and open to the public.

About the book:
“Isabella Stewart’s Tangled Vines, Island Crimes is set in the quintessential seaport town of Edgartown on the island of Martha’s Vineyard, seven miles off the coast of Cape Cod. In the summer, 120 thousand descend on the island, including many notable celebrities: Jackie Onassis, Barack Obama, Bill and Hillary Clinton. But come September, the island shrinks to its year-round population of seventeen thousand hardy souls…some of whom abound in criminal activities.

Her first book in a series features Maria, the island’s leading real estate broker, who is determined at all costs to get accepted into the prestigious Yacht Club despite her Portuguese working-class background; and Rick, an attorney who takes advantage of Maria’s greed and makes himself all-knowing. But when the pressures of her new marriage to a handsome off-islander make it more-than-necessary to keep her real estate sales flowing in, will it also make living life on the island – and keeping him interested enough in her increasing wealth and lifestyle- impossible?

This is not a beach novel taking place in the soft summer winds; it is the flip side taking place in the off-season when the wild vines take hold of vacant summer properties and weaken their foundations, climb and strangle trees, and weave a cloth of deception that is stronger than twine.

Written by someone who lives year-round in this place that only is accessed by boat or airplane, Stewart’s accounts of island corruption and crimes are intense and … truer than fiction … that lead to death. She gives an insight into the dichotomy between the wealthy summer residents and the domestic- and working-class lives of islanders-the good, the bad, and the (almost) unbelievable.”