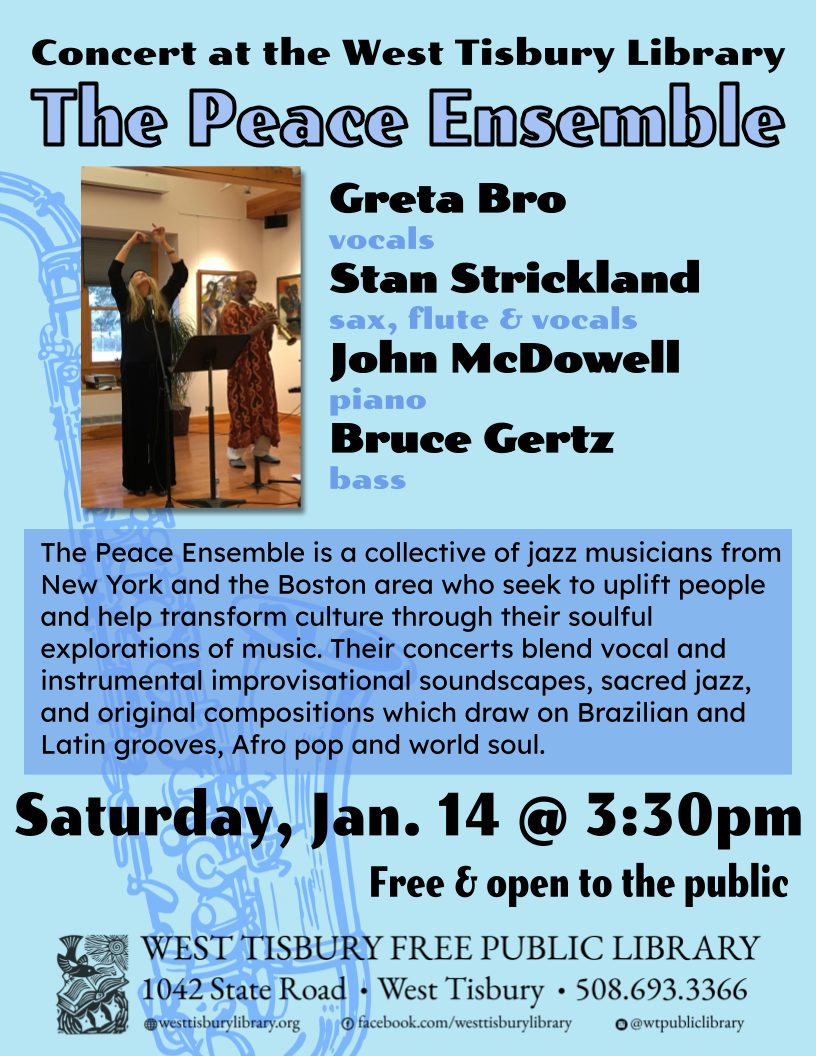 On Saturday, January 14, at 3:30pm, come to the West Tisbury Library for a concert by the Peace Ensemble. The Peace Ensemble is a collective of jazz musicians from New York and the Boston area who seek to uplift people and help transform culture through their soulful explorations of music. The all-star group includes Greta Bro on vocals, Stan Strickland on sax, flute, and vocals, John McDowell on piano, and Bruce Gertz on bass. Their concerts blend vocal and instrumental improvisational soundscapes, sacred jazz, and original compositions which draw on Brazilian and Latin grooves, Afro pop and world soul. This event is free and open to the public.

Musician Stan Strickland is an extraordinary saxophonist, vocalist, flautist and actor. His inspiring interactive and improvisational performances have thrilled American and international audiences including Europe, New Zealand, Scandinavia and the Caribbean. He has performed with the Boston Pops, Take Six, Herbie Mann, Marlena Shaw, Pharaoh Sanders, Danilo Perez, and Yusef Lateef and has opened for Miles Davis and Sonny Rollins. He was featured along with Blair Underwood and Lamar Burton in the documentary film Black Man Up, performed at the Sundance Film Festival. Stan is also a professor at Berklee College of Music and Lesley University.

Pianist and film composer John McDowell achieved worldwide recognition with his soundtrack to the Academy Award winning documentary Born Into Brothels. Winner of several awards for his compositions, McDowell is known for much more than just his film scores, McDowell formed the world music band Mamma Tongue and has toured and recorded with Sting, Rusted Root, and Krishna Das, is the music director and arranger for Tibetan singer Ani Choying. McDowell’s formal education in classical and jazz music and subsequent informal global training of African and Indian music, has made him a largely self-taught ethnomusicologist of wide-ranging scale.

Singer-Songwriter Greta Bro’s lifelong involvement with the sacred and transformational properties of music is at the heart of her writing. Her independent CD, Love’s Song, released in 2009, has been enthusiastically received by audiences across the US, Brazil, Sweden and France. The Boston Herald’s Larry Katz wrote,”The unforced sincerity and soulfulness of Greta Bro’s voice will touch you deep inside. Absolutely lovely.” Greta’s original compositions draw on inspirational music from around the world such as Bossa nova, Latin, reggae and world pop. Her lyrics explore the human condition with insight, affection and compassion. Greta’s intensely personal performing style and soulful sound has created a strong and lasting rapport with audiences in the US, Europe and Brazil. Greta also leads seminars in the healing properties of sound and music.

Bassist Bruce Gertz is known for his mastery of the bass and was named “Outstanding Bassist” by Boston Music Awards. His extraordinary contribution to music education has earned him multiple recognition awards from The International Association of Jazz Educators and the Jazz Education Network. He has been serving as a Professor of Bass at Berklee College of Music since 1976. Additional educator credits include serving on the advisory board of the International Society of Bassists and as an adjudicator at the Clark Terry UNH Jazzer’s Festival. Gertz has performed and recorded with such artists as Gary Burton, Jerry Bergonzi, John Abercrombie, Joey Calderazzo, Kenny Werner, Mick Goodrick, Kurt Rosenwinkel, Billy Hart, Bill Frisell, Bob Berg, George Cables, Gil Evans, Tom Harrell, Jon Hendricks, Diane Schuur, Dave Brubeck, George Garzone, Mike Stern, Larry Coryell, Joe Lovano, Cab Calloway, Maynard Ferguson, Count Basie and many others.