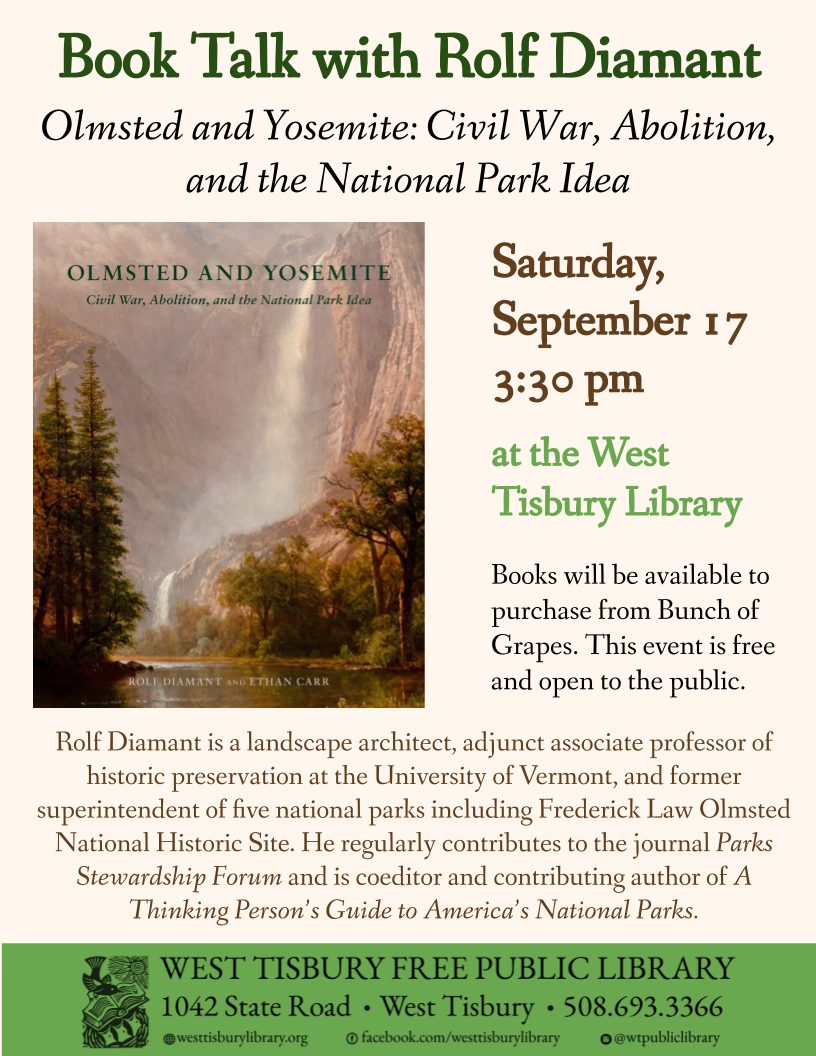 On Saturday, September 17, at 3:30pm, join us at the West Tisbury Library for a talk with author Rolf Diamant. The author will present his newly released book, Olmsted and Yosemite: Civil War, Abolition, and the National Park Idea (Library of American Landscape History-2022). Books will be available to purchase from Bunch of Grapes Bookstore.This event is free and open to the public.

Rolf Diamant is a landscape architect, adjunct associate professor of historic preservation at the University of Vermont, and former superintendent of five national parks including Frederick Law Olmsted National Historic Site. He regularly contributes to the journal Parks Stewardship Forum and is coeditor and contributing author of A Thinking Person’s Guide to America’s National Parks.

Olmsted and Yosemite: Civil War, Abolition, and the National Park Idea
by Rolf Diamant & Ethan Carr
During the turbulent decade the United States engaged in a civil war, abolished slavery, and remade the government, the public park emerged as a product of these dramatic changes. New York’s Central Park and Yosemite in California both embodied the “new birth of freedom” that had inspired the Union during its greatest crisis, epitomizing the duty of republican government to enhance the lives and well-being of all its citizens. A central thread connecting abolition, the Civil War, and the dawn of urban and national parks is the life of Frederick Law Olmsted.

In 1864, Olmsted was asked to prepare a plan for a park in Yosemite Valley, created by Congress to expand the privileges of American citizen­ship associated with Union victory. His groundbreaking Yosemite Report effectively created an intellectual framework for a national park system. Here Olmsted expressed the core tenet of the national park idea: that the republic should provide its citizenry access to the restorative benefits of nature.

The National Park Service has been slow to embrace the senior Olmsted’s role in this history. In the early twentieth century, a period of “reconciliation” between North and South, National Park Service administrators preferred more anodyne narratives of pristine Western landscapes discovered by rugged explorers and spontaneously reimagined as national parks. They wanted a history disassociated from urban parks and the problems of industrializing cities and unburdened by the legacies of slavery and Native American dispossession.

Marking the bicentennial of Olmsted’s birth, Olmsted and Yosemite sets the historical record straight as it offers a new interpretation of how the American park—urban and national—came to figure so prominently in our cultural identity, and why telling this more complex and inclusive story is critically important.